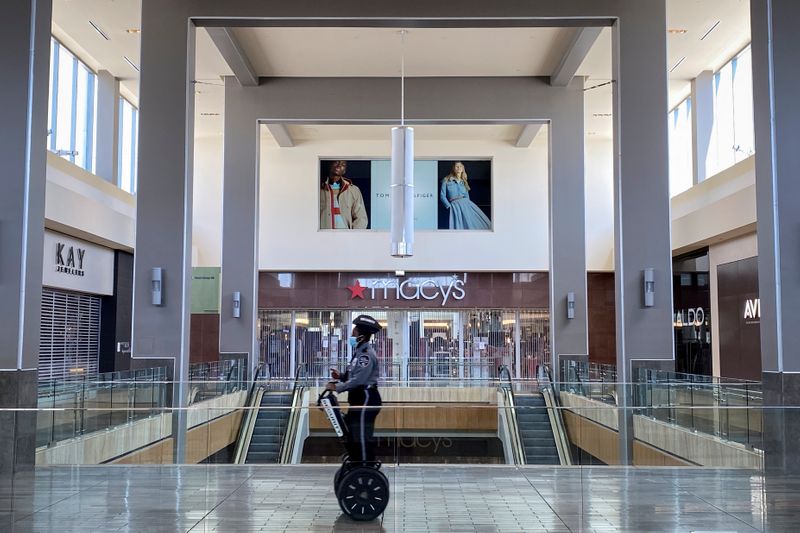 © Reuters. FILE PHOTO: A security guard rides past a closed Macy’s department store at The Galleria shopping mall after the mall opened during the coronavirus disease (COVID-19) pandemic in Houston Texas, U.S., May 1, 2020. REUTERS/Adrees Latif


By Nivedita Balu and Praveen Paramasivam

(Reuters) – Even in the depths of the 2009 financial crisis, it was never this bad for the owners of the world’s biggest shopping malls.

The figures from property consultancy Jones Lang LaSalle come on top of a series of bankruptcies and takeovers, which has seen even sector leader Simon Property Group (NYSE:) hand back control of some buildings to creditors or take over broken retail operations for their debts.

The JLL data predicts that U.S. indoor mall vacancy rates will peak at just under 9% this year compared to 7.8% for outdoor shopping centers and 7% for “power centers”, industry code for open-air centers anchored by big box retailers like Best Buy or Target (NYSE:).

Experts say that a deeper change is underway, with property owners focusing investment on open air locations and smaller stores in cheaper locations where shoppers can feel more at ease in the post-COVID world.

“The demand for space right now is higher than I’ve seen it in 15 years,” said David Lukes, chief executive officer of SITE Centers (NYSE:), who runs over a hundred power and shopping centers.

In Chicago, for example, Macy’s has shut its sprawling store in the Water Tower Place building on Michigan Avenue’s “Magnificent Mile”, a magnet for thousands of shoppers and tourists every weekend for the past half century.

The company is turning to modest buildings like its new “Market by Macy’s”, set on a canalside lot in Fort Worth, Texas and flanked by a steakhouse and a branch of Wells Fargo (NYSE:).

In 2009, vacancy rates for the more downmarket properties peaked at 11% while malls still showed rates of just 5%.

But for Macy’s and others, the cost reward has become compelling: average annual rent for shopping centers in the first quarter of the year was $20.36 per square foot, as little as a third of the cost of big city centre malls.

At Magnificent Mile, vacancy more than doubled to over 8% currently from 4% in late 2019. Rents fell by 2.5% over the past year to a still very high $62.30, according to industry data provider CoStar.

Signet, Ethan Allen (NYSE:) Interiors and Express are among those to have opened stores in suburban areas, ranging from the suburbs of San Mateo, California and Southlake to smaller towns like Westport, Connecticut and Towson, Maryland.

“I’m cautiously optimistic that the lion’s share of what we’ve experienced is sticky.”

(Graphic: Mallrats no more: The shift to open-air centers https://graphics.reuters.com/USA-RETAIL/azgvoqlaavd/chart.png)

City center landlords have responded by turning some city malls into mixed use retail and residential buildings.

In Britain, Intu, owner of Manchester’s Trafford Centre shopping that called in the administrators last year, said they had applied for permission to use its outdoor space for events, food stalls and an urban beach.

Others, like office and mall owner British Land, say they are now targeting “last mile” logistics, to get online orders to consumers’ doorsteps as fast as possible.

For ex-mall goer and Bay Area resident Ian Fagalar, it may all be too late: the Hilltop Mall he frequented as a kid in Richmond, California is now being converted for residential and other uses.

“Retail stores are dropping like flies,” he says. “I shop online 99% of the time now.”