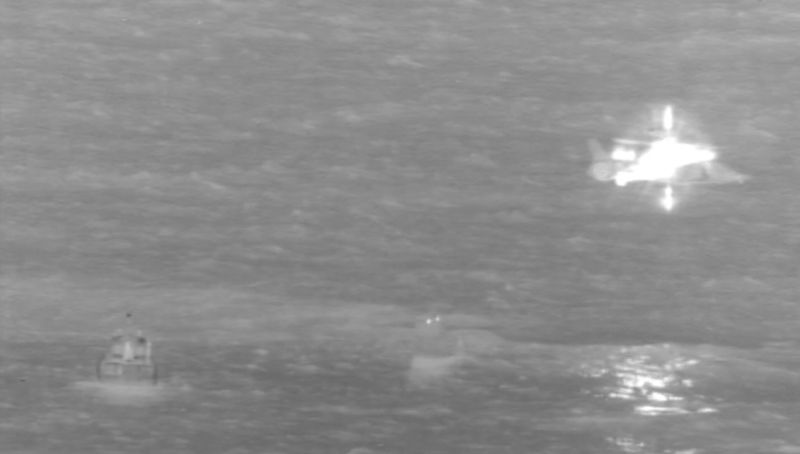 © Reuters. The U.S. Coast Guard and Honolulu Fire Department respond to an emergency nighttime landing of a Boeing 737-200 cargo plane in the Pacific Ocean off the coast of Honolulu, Hawaii, July 2, 2021. Courtesy U.S. Coast Guard

WASHINGTON (Reuters) – Investigators have located a Boeing (NYSE:) 737-200 cargo jet that made an emergency water landing off the Hawaiian island of Oahu in the Pacific Ocean on July 2, the National Transportation Safety Board said on Friday.

Transair Flight 810 was found approximately 2 miles offshore from Ewa Beach. The major components of the airplane — the aft fuselage including both wings and tail along with both engines, and forward fuselage — were located on the sea floor at depths between 360 and 420 feet, the NTSB said in a statement.

The plane components were located with a Side Scan Sonar and Remotely Operated Vehicle, the NTSB said.

The NTSB said the wreckage is too deep to deploy divers for recovery of the flight data and cockpit voice recorders. The investigative team is developing plans to recover the aircraft.

The safety board said fuel samples from another airplane fueled on the same night were tested and no irregularities were found. The agency released photos of airplane components located on the ocean floor.

The two crew members on Transair Flight 810 were injuredafter being forced to land in the Pacific Ocean. One was taken to a hospital by helicopter and the other was rescued by boat.

The Boeing cargo plane was built in 1975.

The crew reported engine trouble and plans to turn backshortly after taking off at 1:33 a.m. local time from Daniel K.Inouye International Airport in Honolulu. The plane was en routeto the Hawaiian island of Maui.

The NTSB said its investigators have completed more than a dozen interviews including the flight crew, other Transair personnel, and Federal Aviation Administration employees.