With all factors considered, the volatile Rand has had an impressive year against its major counterparts, demonstrating a strong degree of resilience that managed to sustain the bearish narrative pertaining to USD/ZAR up until now.

With price action currently consolidating within a well-defined range, a rebound in the greenback may provide bulls with the momentum required to change the direction of the systemic trend.

Since the beginning of the year, a combination of rising commodity prices and a shift in risk sentiment boosted the demand for the Emerging Market (EM) currency as the Dollar remained constrained.

As the country nears the end of the two week level 4 lockdown restrictions, concerns regarding the ongoing battle with rising Covid-19 cases, corruption and unemployment are weighing in on the economy, placing an immense amount of pressure on businesses and consumers who have received little support from the government.

USD/ZAR price action currently remains trapped in a well-defined range between key Fibonacci levels of the 2021 move. After rising above former support, which continues to hold at the key psychological level of 14.00, USD/ZAR has risen above prior trendline resistance causing prices to temporarily stall at the 38.2% retracement, holding as short-term support at 14.23.

Although the formation of a Doji candle (yesterday) is suggestive of indecision, the Moving Average Convergence/Divergence (MACD) remains well-above the zero line suggesting that bullish momentum remains favorable, at least for now. 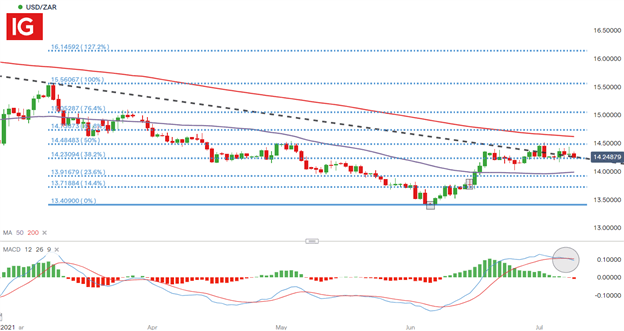 — Written by Tammy Da Costa on behalf of DailyFX.com