Asia shares enjoy relief rally, but hurdles ahead By Reuters 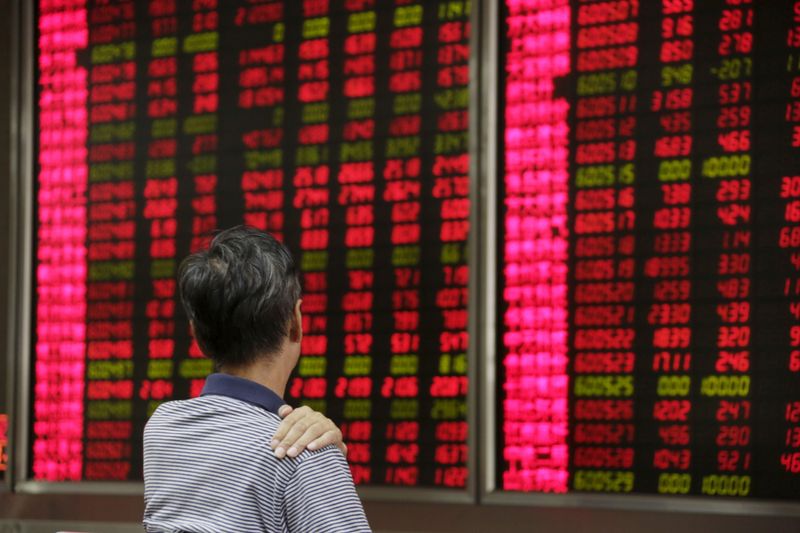 © Reuters. FILE PHOTO: An investor looks at an electronic board showing stock information at a brokerage house in Beijing, August 27, 2015. REUTERS/Jason Lee/File Photo

SYDNEY (Reuters) – Asian shares were enjoying a relief rally on Monday as record highs on Wall Street and policy easing in China helped calm some of the recent jitters on global growth, though plenty of potential pitfalls lay ahead this week.

In the United States, inflation data could provide a scare ahead of testimony by Federal Reserve Chair Jerome Powell on Wednesday and Thursday, where markets will be hyper-sensitive to any talk of early tapering.

The earnings season also kicks off with JP Morgan, Goldman, Citigroup (NYSE:) and Wells Fargo (NYSE:) among those reporting.

China releases figures on economic growth, trade, retail sales and industrial output amid concerns they could underwhelm given the sudden easing in policy last week.

“Expectations around China’s outlook have soured over the past month as a result of some disappointing partial data made a lot worse by the optics of coming off peak growth from the pandemic recovery,” said Westpac analysts in a note.

“However, annual growth is still expected to be above 8.0% and, through the second half of 2022, the quarterly growth pulse should firm back to trend.”

For now, investors were happy that last week’s burst of bearishness had swung around in New York, sending wall Street higher and tempering the bull run in bonds.

bounced 1.9%, and away from a two-month trough touched on Friday, while South Korea added 0.6%. Nasdaq futures rose 0.1% and were a fraction firmer.

“The rally in U.S. rates in July has been remarkable,” noted analysts at NatWest Markets. “No one driver perfectly explains the move…but fears about global growth and the Covid Delta variant had raised new doubts on inflation.”

That bout of risk aversion had also supported the safe haven U.s. dollar, until it ran into some profit taking on Friday. It was last at 92.147 on a basket of currencies, after touching a three-month top of 92.844 last week.

European Central Bank President Christine Lagarde caught markets by surprise on Monday saying the bank will change its guidance on policy at its next meeting and show it is serious about reviving inflation.

The ECB’s new strategy allows it to tolerate inflation higher than its 2% goal when rates are near rock bottom.

The general risk-off mood helped gold higher last week and it was trading at $1,806 an ounce compared to its June trough of $1,749.

Oil prices steadied on Monday after ending a volatile week with a bounce as U.S. inventories tightened. Dealers are still uncertain about the outlook for supplies after OPEC talks on restrictions broke down. [O/R]