Crude oil prices pulled back slightly during Monday’s APAC mid-day session after rising 3.5% over the last two days. The emergence of the Delta variant of Covid-19 is threatening a new round of lockdowns around the world, casting a shadow over the outlook for energy demand. A stronger US Dollar also weighed on commodity prices.

The Japanese government announced a new round of “state of emergency” measures that will cover the entirety of the Summer Olympics Games. Australia’s Delta variant outbreak is worsening too. The country reported the highest number of daily infections on Monday even after Sydney was put into lockdown for three weeks.

The People’s Bank of China (PBoC) unexpectedly eased monetary policy on Friday, underscoring slowing growth momentum as rising raw material prices erode manufacturers’ profit margins. This also warns about a bumpy road ahead for other major oil-importing countries such as Japan and India. That puts Thursday’s release of China’s Q2 GDP data under the spotlight.

Meanwhile, unresolved deadlock between Saudi Arabia and the United Arab Emirates (UAE) remains a wildcard in the oil market. Traders are worried that escalated disputes may reignite a price war among OPEC+ members and hammer oil prices. On the other hand, a resolution may lend support for prices to aim at higher levels. This is because the planned 400k bpd production hike marks only a small fraction of an estimated global supply shortfall of 3 million bpd by the end of this year. 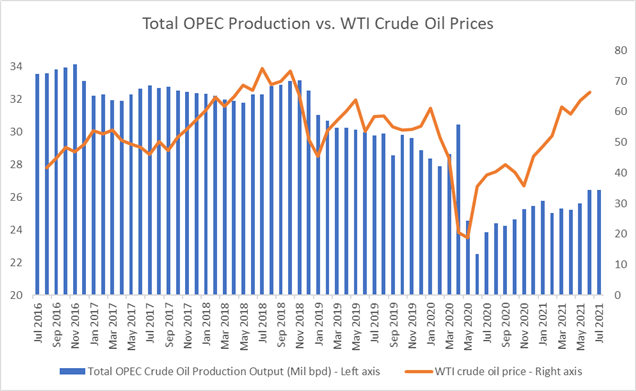 Technically, WTI entered a technical correction that resembles the one that occurred during the end of May (chart below). A healthy pullback may pave the way for prices to challenge higher highs towards $77.4 – the 127.2% Fibonacci extension. A deeper pullback however, may signal a bearish trend reversal.

The MACD indicator formed a bearish crossover and trended lower, suggesting that near-term momentum may be tilted to the downside. 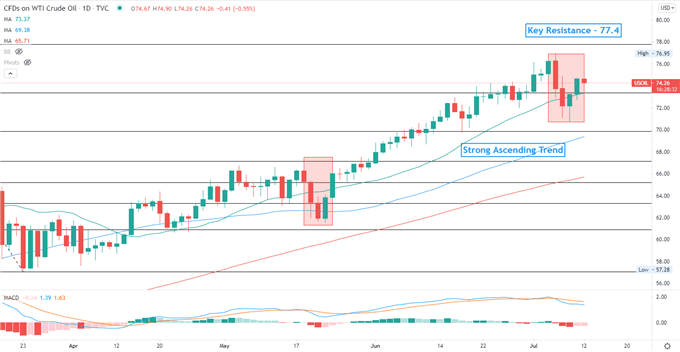