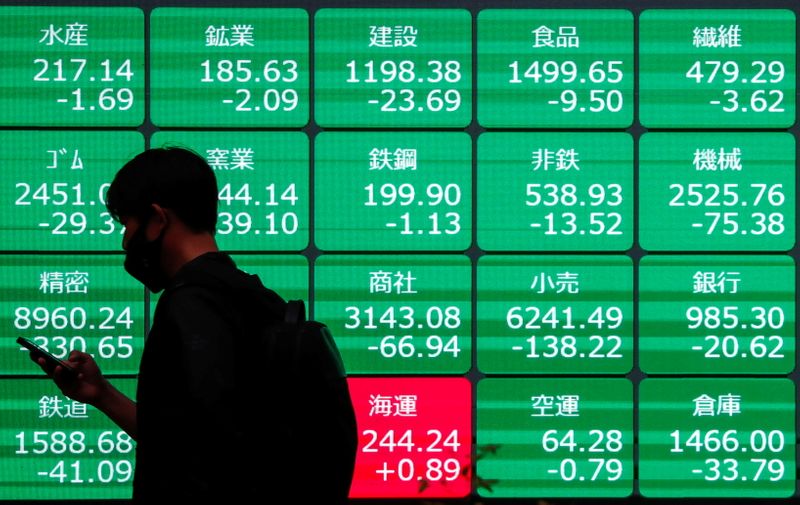 © Reuters. FILE PHOTO: A man wearing a protective face mask walks past a stock quotation board outside a brokerage, amid the coronavirus disease (COVID-19) outbreak, in Tokyo, Japan May 11, 2021. REUTERS/Issei Kato

By Herbert Lash and Tom Arnold

A poorly received Treasury auction sparked a 5-basis point jump in the benchmark 10-year note to 1.413% in early afternoon trade, after earlier falling to 1.343%.

The inflation spike followed a 5.0% increase in the 12 months through May, while CPI rose 0.9% month over month after advancing 0.6% in May, gains that spooked investors.

Stocks on Wall Street initially took the CPI data in stride to bid up technology stocks that typically thrive with low interest rates.

Then came the Treasury sale of $24 billion in 30-year bonds, with the yield, at 2.000%, significantly above the market at the bidding deadline, which was indicated to be 1.976%, said Lou Brien, market strategist at DRW Holdings in Chicago.

The jump in inflation ultimately is a negative hanging over a market that has enjoyed a remarkable rally since the lows of March 2020, said Rick Meckler, a partner at Cherry Lane Investments in New Vernon, New Jersey.

“Inflation is not the worst news for stocks, but it’s very bad news for bonds,” Meckler said. “You’re starting to see some of the potential negatives that could bring an end to this incredible rally this year.”

Traders are looking forward to Fed Chair Jerome Powell testifying before Congress on Wednesday and Thursday for any signals on the timing of a potential tapering of its bond-buying program.

Overnight in Asia, MSCI’s broadest index of Asia-Pacific shares outside Japan rose 1%, its best daily gain since late June, led by a 1.6% rise in Hong Kong, where tech stocks rose broadly. was up 0.5% while Australian shares closed broadly flat.

“We have clearly seen a (new) round of corrections of the technology sector, which places a heavy weight on Hong Kong’s stock market, due to concerns over a new round of regulatory crackdown following the probe into Didi. Against this backdrop, there is room for a short-term rebound,” said Zhang Zihua, chief investment officer at Beijing Yunyi Asset Management.

Euro zone government bond yields have fallen in line with U.S. Treasuries in recent weeks, and are running close to their lowest levels since early April.

dropped to a three-month low, slipping 1.2% to 14.4000 against the dollar, as violence escalated over the jailing of former President Jacob Zuma.

Oil prices edged up as tight supply and expectations of a further draw in U.S. and global crude inventories provided support, though fears over the spreading COVID-19 variant capped gains.