US Dollar May Extend Upward as Powell Reiterates Policy Pivot

The US Dollar returned to the offensive yesterday after June’s CPI report topped forecasts, stoking bets on an accelerated timeline for monetary stimulus withdrawal (as expected). More of the same may be in store as the spotlight now turns to semi-annual Congressional testimony from Fed Chair Jerome Powell.

The central bank chief will sit before the House of Representatives’ Financial Services committee today and return for a repeat performance in the Senate tomorrow. Inflation is likely to be front and center, especially after June’s banner surge to a 13-year high of 5.4 percent on-year.

Powell steered the Fed through an unmistakable pivot away from dovish extremes at last month’s policy meeting. He clearly delivered the message that price growth had exceeded officials’ forecasts and presented updated forecasting introducing 50bps in rate hikes in 2023.

Since then, a steady steam of comments from Fed policymakers highlighted the change in their thinking. Most offered some flavor of admission that the time has come to plot an exit from the ultra-loose posture adopted amid the Covid-19 outbreak. Some called for rate hikes as soon as next year.

This is almost certainly by design. The Fed is acutely aware of the power its words have, and takes great care to wield them strategically. It is not in the habit of introducing a guiding narrative and building it out through numerous officials’ speeches only to suddenly change its mind.

Mr Powell is thus likely to deliver in kind. He will surely modulate his words such as to avoid channeling a sense of urgency, but is nevertheless likely to make clear that the Fed recognizes the inflationary threat and means to do something about if need be. This may encourage the Greenback higher still.

Another bout of US Dollar strength could see AUD/USD puncture key support clustered around the 0.74 figure. A daily close under 0.7384 expose the 0.7222-44 inflection zone on route toward the 0.7120-30 target implied by a recently completed Head and Shoulders topping pattern.

Positive RSI divergence warns that downside momentum may be ebbing however. It is unclear as yet whether this speaks to on-coming reversal higher or merely deceleration after the explosive selloff in mid-June. Reclaiming a foothold above 0.75 may speak to the former, opening the door to test 0.76 next. 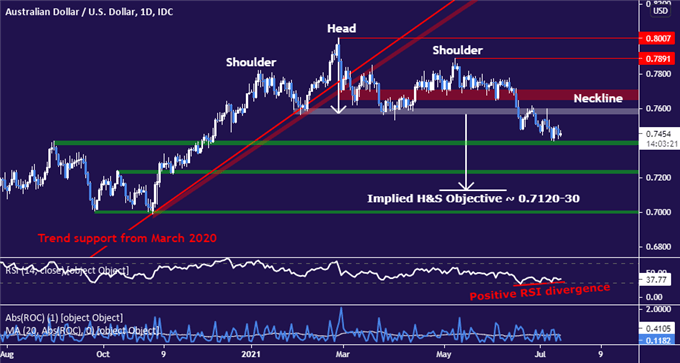