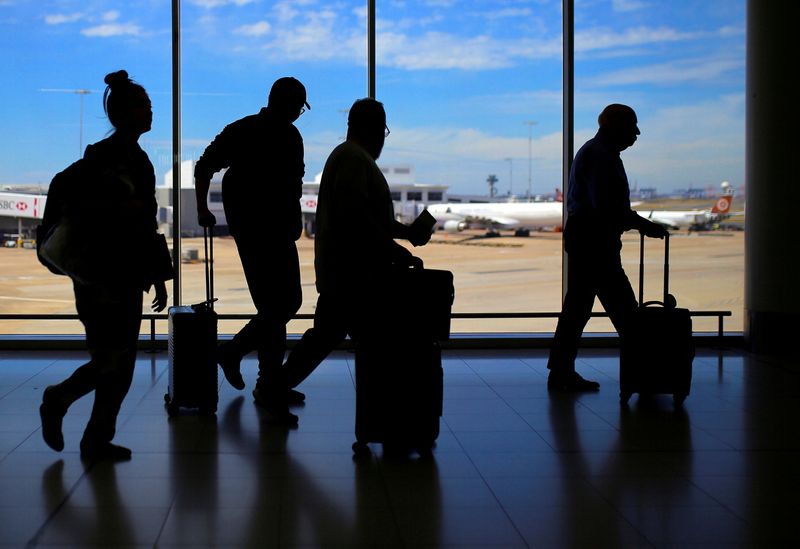 
By Jamie Freed and Paulina Duran

SYDNEY (Reuters) -Sydney Airport Holdings Pty Ltd said on Thursday it would reject a A$22.26 billion ($16.6 billion) takeover proposal from a group of infrastructure funds, the biggest of a frenzy of Australian deals in reaction to record-low interest rates.

The operator of Australia’s largest airport said directors had unanimously concluded the proposal undervalued the airport and was not in the best interest of shareholders. If successful, it would have been one of Australia’s biggest buyouts.

The Sydney Aviation Alliance – a consortium comprising IFM Investors, QSuper and Global Infrastructure Partners – last week offered A$8.25 per share, a 42% premium to pandemic-ravaged Sydney Airport’s last trading price before the offer was made.

Sydney Airport shares were flat in early trading at around A$7.80 on Thursday, indicating the market expects further negotiations between the parties.

The proposal is contingent on a board recommendation and access to due diligence. Sydney Airport said its board would only accept a buyout deal that would “deliver and recognise appropriate long-term value”.

“The board is obviously trying to play hardball, but we do think it’s a pretty unique long-dated asset so we are supportive of their decision so far,” Andy Forster, a portfolio manager at Argo Investments, a top-20 investor in the airport, told Reuters.

The Sydney Aviation Alliance did not respond immediately to a request for comment.

The Australian government has a 49% cap on foreign ownership of airport operators. IFM, QSuper and UniSuper are Australian investors, while Global Infrastructure Partners is from the United States.

Sydney Airport is Australia’s only listed airport operator and a purchase would be a long-term bet on the travel sector. The city is currently in lockdown for at least two more weeks after a rise in COVID-19 cases.

A successful deal would bring its ownership in line with the country’s other major airports which are owned by consortia of infrastructure investors, primarily pension funds.

Australia’s mandatory retirement savings system, known as superannuation, has assets of A$3.1 trillion, according to the Association of Superannuation Funds of Australia.

A Sydney Airport purchase, with an enterprise value of A$30 billion including debt, would position them to reap financial benefits when borders reopen.

If successful, the purchase would be one of Australia’s largest by enterprise value in U.S. dollar terms, on par with the $22 billion purchase of mall operator Westfield Group by Unibail-Rodamco (AS:) in 2017, Refinitiv data showed.

It would require the approval of the Foreign Investment Review Board and Australia’s competition regulator.

IFM, which has holdings in other major Australian airports, may have to sell down a portion of those stakes due to cross-ownership rules, Morgan Stanley (NYSE:) analyst Rob Koh said at a CAPA Centre for Aviation event on Wednesday.

“It may be there is a series of further airport transactions as a result of this,” Koh said, adding that co-owners that likely have pre-emptive rights would be logical buyers.