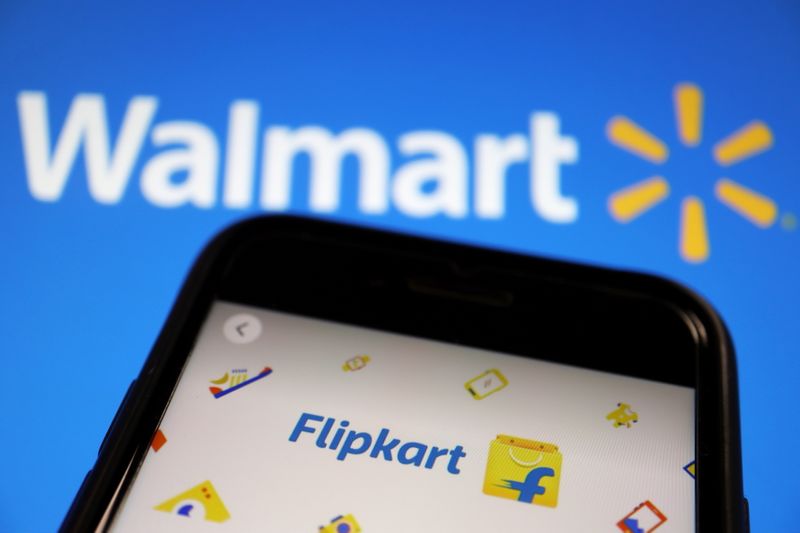 
By Aditya Kalra and Abhirup Roy

NEW DELHI (Reuters) -Walmart’s Flipkart should not be treated the same as rival Amazon (NASDAQ:) in an Indian antitrust probe as the evidence against the two firms was “qualitatively different”, Flipkart argued in a court filing seen by Reuters.

Both Amazon and Flipkart have challenged the Competition Commission of India (CCI) in court as they seek revocation of an Indian court’s June decision to allow https://www.reuters.com/world/india/india-court-dismisses-pleas-by-amazon-flipkart-quash-antitrust-probe-lawyer-2021-06-11 an antitrust probe against them to continue. The companies deny any wrongdoing.

India’s government has called the U.S. firms arrogant https://www.reuters.com/world/india/indian-commerce-minister-arrogant-us-ecommerce-giants-flout-our-laws-2021-06-27 and accused them of using legal routes to stall the investigation.

In final submissions made to a court in southern India’s Karnataka state, the Walmart (NYSE:) unit argued that CCI and the court “confuse the facts” between the case of Amazon and Flipkart, and overlooked that they were “fierce competitors”.

To back its arguments, it said that a business agreement examined by the CCI before ordering its probe was only between Amazon and its sellers, and there was no such evidence against the Walmart unit.

“The allegations and the evidence before the CCI against the Appellant were qualitatively different from those relating to Amazon … The CCI should have independently examined the case against each of the two platforms,” Flipkart said in its 46-page submission, which was not public.

The Indian court is likely to pass a written order on the appeals in coming days.

Flipkart and Amazon did not immediately respond to a request for comment. The CCI didn’t respond outside regular business hours on Sunday.

For years, Amazon and Flipkart have denied allegations from brick-and-mortar retailers about circumventing Indian law by creating complex business structures.

Trade minister Piyush Goyal last month lashed out on U.S. e-commerce giants for filing legal challenges and failing to comply with the CCI’s probe, saying “if they have nothing to hide … why don’t they respond to the CCI?”

In February, a Reuters investigation https://reut.rs/2OCOT2W based on internal Amazon documents showed the U.S. firm for years had helped a small number of sellers prosper on its platform in India, using them to bypass foreign investment laws. Amazon also has indirect equity stakes in two of its big online sellers, Cloudtail and Appario, which get “subsidized fees”, Reuters reported.

The Walmart unit argued in its submission that “unlike in the case of Amazon”, there were no structural links of any kind between Flipkart and its sellers.

Flipkart “ought to have been treated differently from Amazon,” it said.

Amazon and Flipkart are leading players in an e-retail market India forecasts will be worth $200 billion by 2026.