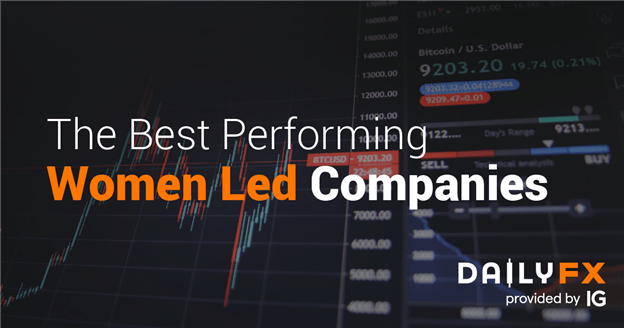 In an effort to raise awareness for women-led companies in the stock market, DailyFX has indexed the best performing companies that have a woman at the steering wheel.

We looked at the companies within the FTSE 100, S&P 500 and ASX 200 who are led by women. Our ranking then scored them out of 10 against a number of metrics such as revenue performance, market cap, number of employees, stock price, stock market rank and employee satisfaction.

Out of all the companies listed on The Financial Times Stock Exchange 100 index, just 4 have a woman at the helm.

Ranking on top as the best scoring woman-led firm on the FTSE100 is pharmaceutical enterprise GlaxoSmithKline (GSK). Emma Walmsley has been their CEO since 2017 when she became the first woman to run a major pharmaceutical company.

Under Walmsey’s command an overall score of 8 out of 10 is obtained, with factors such as high employee satisfaction (3.8) and ranking 9th on the stock market being the biggest contributors.

In second place is the English water company Severn Trent (SVT). Led by Liv Garfield since 2014, the firm secures an overall score of 5 out of 10 on our index. SVT sees some of the highest employee satisfaction in this index at 4.1 amongst the 6,800 members of staff, as well as a dividend of 4.11% and stock market price of £2,307 per share.

Coming in third is the multinational British hotel and restaurant company, Whitbread, with Alison Brittain in charge. Alison joined the company in 2016 from Lloyds Banking Group, taking over the role of CEO from Andy Harrison.

The parent company of Premier Inn, Whitbread restaurants and Costa Coffee scores an overall 4 out of 10 in our study, with aspects such as an employee satisfaction rate of 3.8, position 69 on the stock market and the highest price per share in this list at £3,490.

The Standard and Poor’s 500 index includes 500 of the largest companies listed on stock exchanges in the United States. But there’s just 31 women-led firms ranking, equivalent to 6.2%.

Ranking as the best company managed by a woman on this index is the Irish-domiciled multinational providing consulting and processing services Accenture (ACN), where Julie Sweet has been the CEO since 2019. Additionally, she’s a member of Accenture’s Global Management Committee and The New York Times called her “one of the most powerful women in corporate America.”

Under Sweet’s command, the company scores an overall score of 8 out of 10 in our study. This is thanks to the high satisfaction of her nearly 100,000 employees at 3.9, an astonishing market value of £173 billion and her securement of rank 39 on the stock market.

Ranking second is United Parcel Service, better known as UPS. At this parcel service it is Carol Tomé leading, and locking in an overall score of 7 out of 10. Their workforce of nearly half a million gives the firm an employee satisfaction rate of 3.6, on top of which the company has an annual revenue of £84.6 billion and market value of £146 billion.

Following suit in third place with an overall score of 6 out of 10 is the computer software firm Oracle Corporation (ORCL) where Israeli-American Safra Catz took the seat of authority in 2014. With a market cap of £213 billion, rank of 58 on the exchange and staff satisfaction of 3.7 this is a well-deserved achievement.

Margaret Yang, DailyFX Strategist, says: “Although the corporate world has pursued strategies to promote women to leadership roles for years, the gender gap remains wide at the helm of the world’s top listed companies. These standouts can serve as role models to inspire other women to aim for the top job.”

Australian’s stock market index, ASX 200, scores most poorly out of the three indexes with as little as 3 women CEOs listed, making up just 2%.

But that doesn’t stop Shemara Wikramanayake, CEO of the multinational investment firm Macquarie Group Limited, from achieving excellent scores with an overall rank of 8 out of 10. This is thanks to the company ranking within the top 10 (9th) on the stock market, an annual revenue of $10.6 billion (AUD) and market value of $90.6 billion. Wickramanayake joined the firm in 1987, taking on the role of CEO in 2018. Not only is she the only woman CEO amongst Australia’s top 20 biggest companies, she is also the first Asian-Australian woman to head an ASX 200 listed company.

Following suit is Coca-Cola Amatil Limited (CCL), led by managing director Alison Watkins, helping the company secure a score of 6 out of 10. Elements contributing to this score include the satisfaction of their 12,000 staff members at 3.7, ranking 51st on the stock market with a market cap of $17.6 billion.

Third place is for industrial company CSR Limited (CRS), run by Julie Coates since 2019. A market cap of $5.5 billion, annual revenue of $4 billion and 2,823 members of staff giving a satisfactory score of 3.6 accumulate to an overall score of 5 out of 10 for this Australian woman-front firm.

There are many women leaders across the world changing the face of economics, business and finance. However, our research has shown that there is still a big gap between the number of organizations with a male CEO versus the number of firms that have a woman CEO. With an average of less than 10% of companies being women-led, there is still a lot of work to be done to reach anything close to equality.

As Daniela Sabin Hathorn, DailyFX analyst, says: “Although a lot has changed in the last few decades, the top spots at the world’s biggest companies continue to be mostly reserved for men. The companies listed above are a great example of how women are leading the way in their respective fields, and will hopefully serve as an example to future women leaders so we can tip the scales of equality even further.”

DailyFX provides forex news and technical analysis on the trends that influence the global currency markets.

In order to establish the best performing women led companies, we took a variety of metrics such as market value, market cap, number of employees, annual revenue, rank within stock market, dividends and employee satisfaction and created a ranking system.